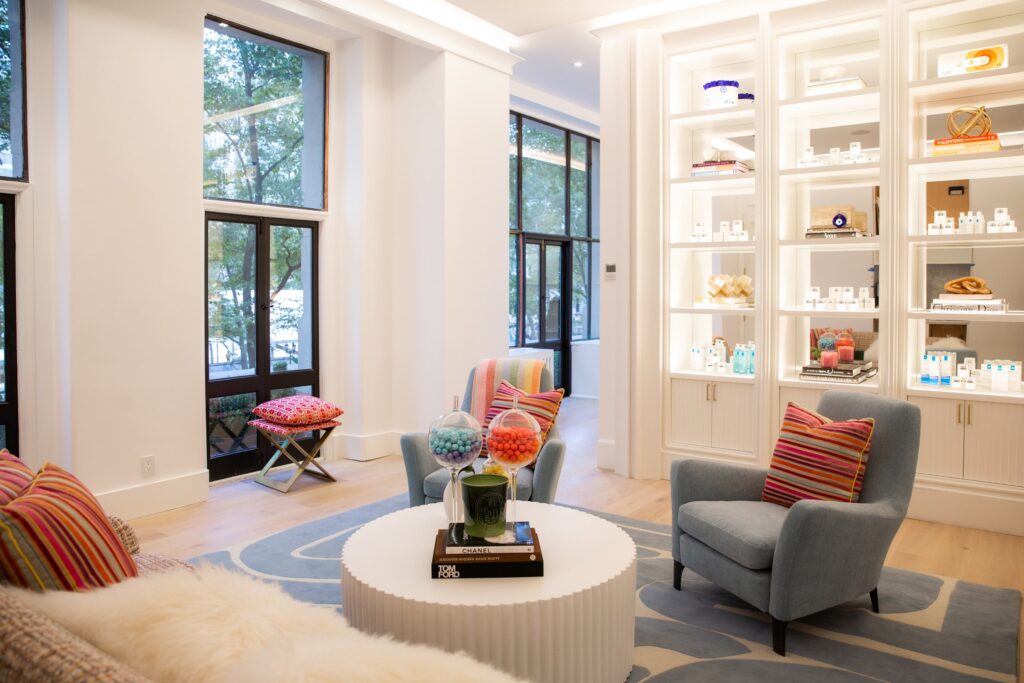 It’s fair to say that Dr. Shereene Idriss’s patients—Emily Ratajkowski, Ashley Graham, and Paloma Elsesser chief among them—would follow her anywhere. But that didn’t stop the 37-year-old board-certified dermatologist, who’s known for a subtle sleight of hand with fillers, injections, and lasers, from going the extra mile with her first namesake office, Idriss Dermatology, which she lovingly refers to as “the apartment.” “Cosmetics is very intimidating; I just wanted people to feel at home,” Idriss explains, as she greets me at the door in a pair of knee-high combat boots and a rainbow-bright Roxanne Assoulin bracelet whose tiles spell out HAPPY.

Overlooking Bryant Park, the Midtown Manhattan space, which she ultimately landed on after touring some 40 buildings, is decked out with feel-good touches: an olive tree (a trace of her Lebanese roots) stands front and center; jars of color-coded gum balls are on offer for anyone in need of a pre- or post-treatment sugar fix; playful Gray Malin prints and paintings done by Idriss herself line the walls. The shelves of the inviting waiting room, meanwhile, host art books, skin-care heroes from La Roche-Posay and Jordan Samuel (and eventually Idriss’s own forthcoming line, PillowtalkDerm), and, most notably, a handful of custom-made gifts from a number of her devoted 366,000-plus followers, who tune in for her weekly Instagram Live series. “Even my family’s not this thoughtful!” she says with a laugh.

There’s a reason, after all, that even in a city full of top dermatologists and social media-famous aesthetic bars, her receptionists had to stop scheduling appointments only mid-way through their opening day. “I don’t try to mold people into what they’re not,” says Idriss matter-of-factly, sitting cross-legged on a blue rug. “I listen,” she continues, “but I have no problem putting my foot down and saying no.” To wit, though acrylic bar carts topped off with syringes full of Botox, Restylane, and Juvederm may fill each of the seven treatment rooms, Idriss often uses just a fraction of what’s inside the vials—and only after sitting with a client and taking the time to study how her face moves. Such a slow-and-steady technique, which emphasizes return visits over a one-and-done approach, may throw off the occasional visitor in search of a seemingly Instagram-filtered face, but Idriss insists the results can be nevertheless dramatic. As she puts it, “It’s the little details that elevate everything”—and not only the visage. “The changes small tweaks can bring to someone’s personality and confidence are huge.”