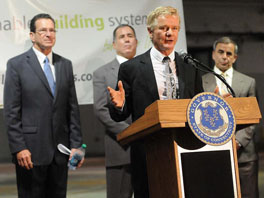 State officials have been working for about eight months to bring an international venture to an empty manufacturing plant on State Street.

The work and negotiating paid off Wednesday when Gov. Dannel P. Malloy announced that Sustainable Building Systems LLC would be moving a “green” steel manufacturing plant to the former Quebecor/Northeast Graphics complex within the year.

More than 400 jobs are promised over the next four years.

ustainable Building Systems is an amalgamation of the 31st largest company in Australia, the Weeks Group, and Diverse Services Group of Scotsdale, Ariz.

“In the last century, the steel industry was the backbone of our nation, providing jobs and helping to build the middle class,” Malloy said. “Companies like Sustainable Building Systems represent the next evolution of that industry. By embracing 21st century technology, what’s old is becoming new again. Green products represent the future and I’m happy to welcome Sustainable Building Systems to American soil.”

The company will make sustainable building panels for homes, hotels, the military and more. The company will be taking advantage of the state’s “First Five” incentive program. The program aggregates tax credits and subsidies for companies that promise to create at least 200 new jobs within two years or invest no less than $25 million and create more than 200 jobs no later than five years after the agreement is approved.

The state Department of Economic and Community Development will provide a 10-year loan of $19.1 million for the $97 million project, according to Economic Development Commissioner Catherine H. Smith.

Sustainable Building Systems is the sixth company to take advantage of First Five, and, since the program began, 8,449 jobs have been retained and 3,048 more jobs will be created, Malloy said. The program has seen combined investments of $658 million, compared to $128 million in state money, he said.
Malloy, a Democrat, thanked Smith and the state economic development team for their work in bringing Sustainable Building Systems here, as well as Republican First Selectman Michael J. Freda, state Sen. Leonard A. Fasano and state Rep. Dave Yaccarino, both R-North Haven.

“To work with this first selectman is an absolute joy. He knows business and is a tireless advocate for the community,” Malloy said.

Duane Armijo, chief executive officer of DSG and president of Sustainable Building Systems, said DSG always has sought ways to build better and started looking at new products, technologies and systems. Sustainable is a “new systems approach to construction. The backbone of the product line is expanded polystyrene and light gauge steel.”

The “brains” of the product line, Armijo said, is the computer program established by the Weeks Group of Adelaide, Australia. The system reduces cycle times and cuts energy use by 50 percent, he said. 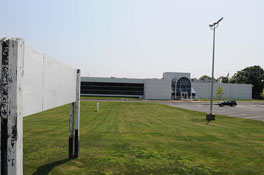 “We are extremely excited to have our new home here,” said Armijo, adding that he is looking at an initiative to bring in veterans to work for the company.

Armijo said a Waterbury lawyer, Timothy Moynihan, called him to say there was a program in Connecticut that would help “move our business forward.”

Peter Zitis, CEO of Steel Building Systems International, a subsidiary of Weeks Group, said he was excited at the opportunity to expand in the United States, as well as being able to take advantage of First Five.

“We wouldn’t be here if not for First Five and DSG, which approached us about our technology,” said Kevin Weeks of Weeks Group. “The products we have will give us an edge internationally.”

Weeks said Connecticut has “a great deal of wealth” in its education system, and “the smarts to see it through.” He said his company can’t find enough qualified people for its jobs in Australia, and that the people at its design center in India “don’t understand the way we build.”

Freda has been working for almost two years to help Joseph Coci III, president of Mountain Acquisition Corp. of Shelton, fill the building Mountain Acquisition purchased in 2010. “We had so many different developers interested, and opportunities that didn’t materialize,” said Freda.
According to Smith, First Five is designed for larger companies that want to grow their businesses by 200 or more employees. In this instance, a 10-year loan of $19.1 million at 2 percent interest will be disbursed in three installments. Funding will go toward purchase of machinery and equipment.

Freda said things picked up when the DECD saw the opportunity to reinvigorate the vacant property. “This collaborative effort between the town, the state and the owner of the building evolved into discussions of the First Five program. I’m very grateful to the state of Connecticut for helping us to consummate this effort,” Freda said.

Fasano called the announcement a “win-win” for North Haven and the state.