Kate Spade, the Person, Has a New Venture: Frances Valentine 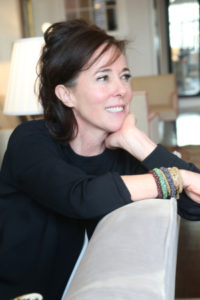 NEW YORK – Kate and Andy Spade are aware of the power of a name. They put a lot of thought into what to call their new company, settling upon Frances Valentine for the shoe and handbag line that launches for spring and is opening for press previews today. (The nameKate Spade is already in use.)

Frances is a longtime family name on my dads side, said Kate. My grandfather, father, brother and my daughters name is Frances. And then Valentine was my moms dads middle name because he was born on Valentines Day.

There were a lot of things we made up and we thought that wasnt feeling right, said Andy. A persons name felt like this thing that was part of us, that connection, something real.

Frances Valentine, the brand, is not Kate Spade, the brand. There are big differences some of them legally mandated so as not to infringe on Kate Spade & Co. but there are also similarities, including three of the founding partners the Spades and Elyce Arons, who cofounded Kate Spade in 1993.

Their fourth partner in Frances Valentine is Paola Venturi, who joined the company Kate Spade in 2001 as design director. All of them walked away from that company entirely in 2007, a year after it was acquired from the Neiman Marcus Group for $125 million by the group then known as Liz Claiborne Inc., which subsequently sold off all its other operations to transform itself into the current publicly listed Kate Spade & Co. Kate and Arons have spent the last eight years focusing on their families, while Venturi went to work for Prada and Andy cofounded Partners & Spade design studio, the art space Half Gallery, and the pajama brand Sleepy Jones, while also working on a number of film and photography projects. 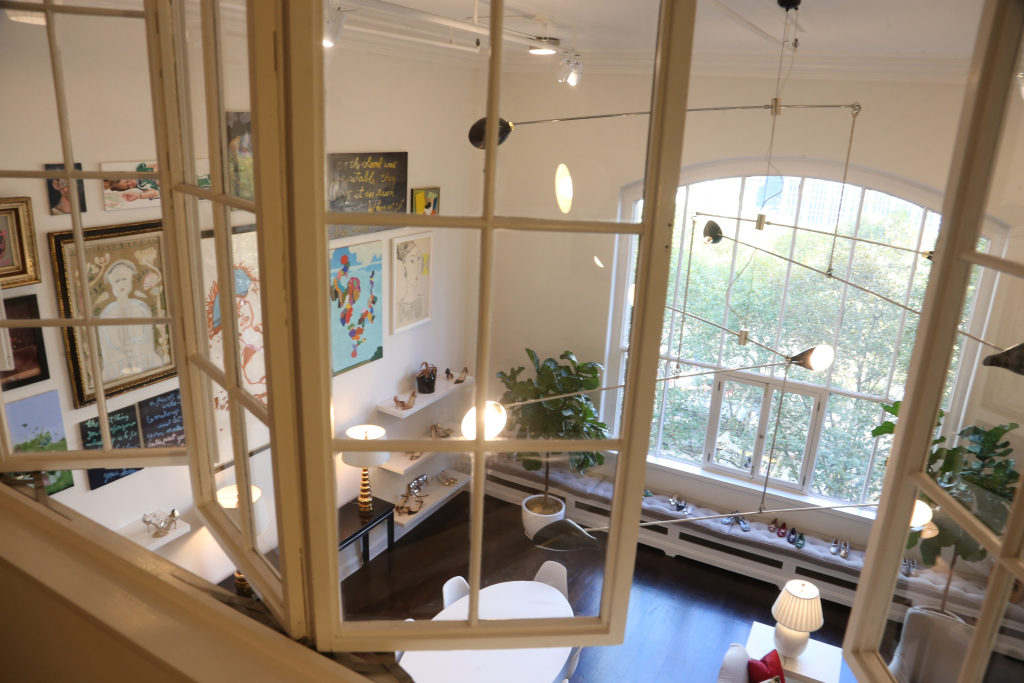 To a great extent Frances Valentine is a start-up, beginning much the same way Kate Spade did in 1993, but the players have more professional experience and personal financing. The showroom at 80 West 40th Street here is decorated like a stylishly homey townhouse with furniture from the Spades former house in Long Island and walls full of art Andy has collected a Julian Schnabel, an Anna Gaskell. There are no investors besides the four principals. They each came back to essentially the same role he or she left in 2007 with the exception of Venturi, who is now a full partner because they enjoyed working together and wanted to build a business. Plus, Spade and Arons kids are old enough that they dont require full-time attention. Frances Valentine is beginning with something specific and targeted shoes and bags only. Someone else said, Oh, I really expected guns-a-blazing, that you were going to come in with a whole lifestyle brand, said Kate. I said, No, we wouldnt do that.

Simply modern is the language the group has decided best describes the collections aesthetic. There is a familiar, wholesome but quirky, colorful Americana to the look, though everything is produced in Spain and Italy, where Venturi is based, putting the price points slightly higher than the Kate Spade of yore. Flat mary jane espadrilles are $275; snakeskin sandals with a chunky jewel-shaped heel are $625. I feel like the shapes are very sculptural, said Kate, hesitating a bit before deciding not to apologize for her design ethos. I cant say that Im a different person than I was when I left. Its not like I went away for eight years and I came back and Im suddenly Rick Owens. That didnt happen. 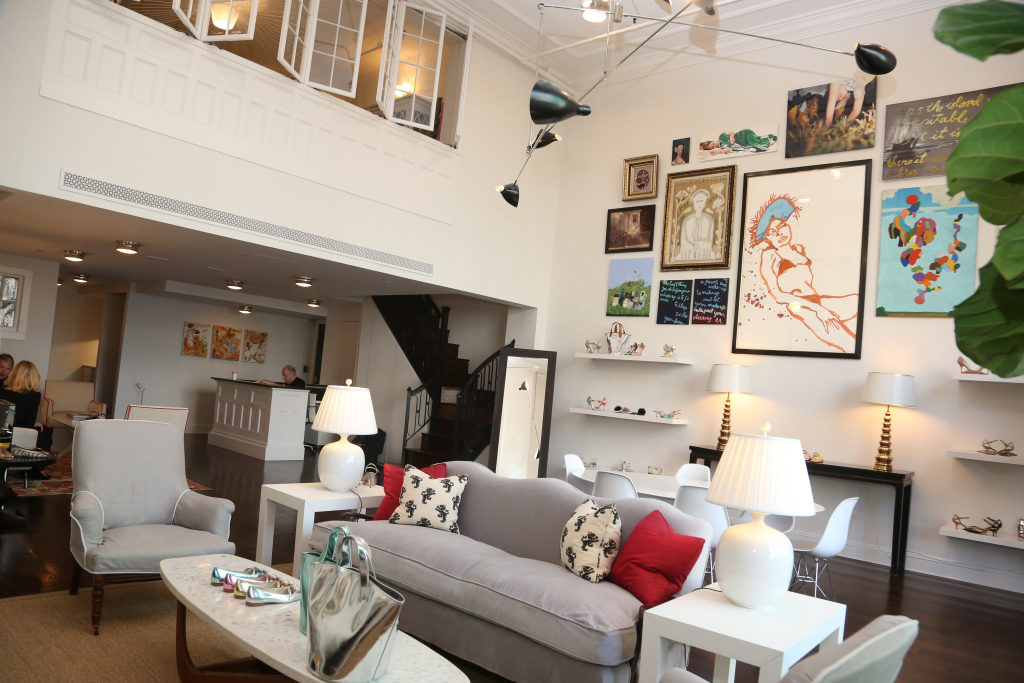 Perhaps Kates ethos hasnt drastically changed in the time since she was last designing, but the fashion landscape has. The team knows this. Kate Spade was always a relatively accessible brand, built on Spade and Arons Midwestern values. They met as teenagers in Kansas, and retain that sensibility even after decades of privilege in New York City. Part of the positioning of Frances Valentine was in reaction to Spade and Arons experience as civilian consumers in their time away from the professional fashion world. I would go out and look for great shoes and they were priced really high, said Arons. It was just surprising to me.

Most of the shoe styles in the Frances Valentine collection hover around $400. Bags, including bucket shoppers in metallic leather and canvas and envelope clutches, go from $225 to $725.

When Kate Spade started in the early Nineties, there wasnt nearly as much competition. When we came out, there were only like five accessories houses Prada, Coach was the biggest American, said Andy. We were the first in America to work with nylon. We got lucky, he said of the original Kate Spade spare, nylon styles. Now, the market is full. A woman doesnt need shoes; she needs to fall in love with shoes, said Venturi. We have to make her fall in love.

Although Frances Valentine is new, its management has deep connections in the industry, putting the company at an advantage. They did market for retail in August. We were pretty quiet about it, said Arons. But we got the showroom ready and made the calls and everybody came. The first collection ships Feb. 1 to retailers including Nordstrom, Bloomingdales and Shopbop, as well as specialty stores such as Walin& Wolff in Connecticut and Westchester, New York and Gus Mayer in Birmingham, Ala. There are also plans for their own retail, beginning with a New York City store, timed to the launch depending on construction. A lease is being negotiated. First-year sales projections are $1 million through the companys e-commerce and $4 million through its retail store and wholesale channels.

There is also a vast digital universe that has exploded since the time of the teams exit from Kate Spade. We had Facebook and MySpace, said Andy Spade, who is eager to embrace the many digital platforms that exist for film and photography. It was hard to do before because you could make a film, but show it where? Youd show it at the CFDA Awards or youd have to have a screening. Now you can show a 10- to 15-second short all over the world. Hes already been working on collateral, shooting the shoes and bags against the desert landscape of Joshua Tree National Park in California. In a market that is glutted with every kind of fashion business imaginable, the Spades and their partners are in a unique position. Its difficult to pinpoint a parallel, where the founders and namesake built a successful company, walked away at will and regrouped years later to do something new, while the original company lives on and thrives. Spade herself said its never been difficult for her to differentiate between her personal identity and that of the company that bears her name. But what about Frances Valentine as a design venture by theKate Spade? Will there be confusion? A transitional period while people untangle all the creative and business associations?

I dont think so at all, said Kate. I think we will definitely make sure we distinguish ourselves because we wouldnt want to repeat what weve done or go head-to-head with our namesake. Thats a goal, for sure. There are other goals jewelry perhaps, though Kate said as of now, there are no plans for ready-to-wear. Frances Valentine is not a vanity project. The partners want to build a business, as they did the first time around. Even if outside expectations of a new Kate Spade venture are certainly high, from the inside they insist they have the luxury of low pressure. Thats the beauty of being independent.

We dont have a rush schedule, said Andy. We dont have to have growth in three years to a level thats expected of us. I think well go at a pace thats comfortable, a realistic one.