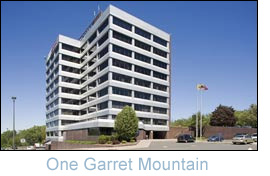 Woodland Park, NJ- Mountain Development Corp., from Clifton, and the Scarsdale, NY-based Meritage Properties have teamed up to buy One Garrett Mountain, a 174,728-sf office building here, for $23 million. The seller was Garrett Mountain Trust, an entity controlled by the Morristown-based Hampshire Cos.’ Hampshire Generational Fund. The sale price for the 10-story building factors out to $131.6 per sf.

Much of the building is occupied by North Jersey Media Group (73,458 sf), a major publishing company whose publications include the Bergen Record, and PNC Bank (48,865 sf). Other tenants include the firms of Norton Arpert Sheehy & Higgins, Klein Insurance Services and Kalman Harris Geist. At the time of sale, the building was 82.8% leased.

“One Garrett is a strategic acquisition for Mountain Development Corp., which owns Three and Five Garrett, the other two assets in the park,” Oram says. “As the managing agent, they will be able to achieve economies of scale in their operations and greater flexibility for their tenants.”

Hampshire acquired the building in 2000 for $14.7 million as part of the initial round of acquisitions by the then newly formed private investment fund management company.